In autumn 2018, Feltmakers Ireland were invited by Filtti, the association of Feltmakers of Finland, to take part in a joint exhibition of work, to be shown in  Jamsa, Finland during the month of July, 2019. The chosen title for the show was to be “Something Red”. While taking felt to Finland seemed a bit like taking coals to Newcastle, we were up for the challenge.

We put out a call to our members, seeking submissions for a juried selection of works to be sent to Jamsa. We are grateful to Leiko Uchiyama and Colleen Prendiville for agreeing to act as our two independent judges. After a double anonymous judging we had a selection of 26 pieces from 18 artists. These covered just about every imaginable aspect of felted art. There were framed pieces, sculptural works, wall hangings, wearables, even a book. We sent photographs of a selection of the work to our colleague Sirpa Mäntylä for their advance publicity. The chosen pieces were then all carefully wrapped and shipped to Sirpa in Jamsa in plenty of time for their team to prepare the display.

Filtti kindly suggested that some of us might like to travel over for the opening of the show on Sunday 30th June, and some of us did! A group of 6 travelled over, including our chairperson Vicky Blomfield and Maureen Cromer, the curator of the Irish works. We arrived the day before the opening, just as they were finishing the hanging, and were able to make any adjustments to the display that we felt were needed.

Filtti certainly had prepared a full itinerary for the 3 days that we were with them. After arriving and having a light meal, we were joined by the journalist from the local newspaper who wanted to know all about our pieces and our artists. She walked around the entire exhibition, asking questions and taking photographs. There is a great amount of local interest in this annual exhibition.

Here is an extract from a local newspaper;

The Massacre of Ballymurphy 1971 has affected the Irish felt makers’ self-esteem and has now been the source of inspiration for artist Tamzen Lundy in her felt work for the felt exhibition of Finnish Felt association Filtti in Jämsä.

11 civilians were killed by British soldiers in Ballymurphy. The incident had a strong influence which escalated in the bloody Sunday a year later. Eleven dead civilians with their bullet holes have been felted symbolically in Lundy’s felt work. The work has been placed downstairs at the Kivipankki gallery in a cantered place.

When we read what this piece describes, it raised the hairs in my neck. This work truly raised surprisingly strong feelings among artists, says Vicky Blomfield.

The 21st felt exhibition opened on Monday at Kivipankki. The exhibition has a strong international taste. The exhibition is open for public, is free of entrance fee and ends August 4th and carries a name “Something red”.

The exhibition has 18 Irish and 26 Finnish felt works. The red thread of the exhibition is colour red. There are many various materials and forms in the exhibition, from felt shoes to wall hangings and sculptures.

Supported by the Irish Design and Craft Council, Feltmakers Ireland organized a jury and finally 26 felt works were chosen from 18 felt artists. The weight of feeling in the exhibition is strong.

Maureen Cromer of Feltmakers Ireland association tells that they brought works of 18 felt artists to Finland. Some of the works reflect a strong political message.

The heartache of the Irish. E.g. in my works is deal with mental health and healing, Cromer tells. 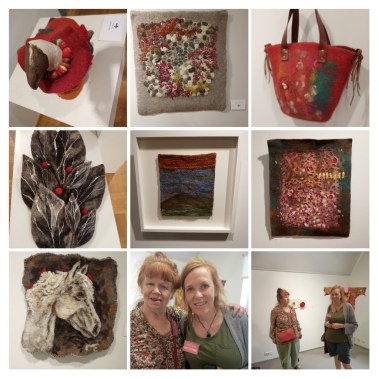 The next day was the long anticipated opening of Something Red. There were quite a few members attending, which when you consider the size of the country was impressive! It was lovely to meet like-minded people and discuss the differences and similarities in our culture and practice, and in the materials we use and the artists we are familiar with. The exhibition was opened by Päivi Himanen, the Cultural Director for the area, and gifts were exchanged between the two guilds. Then Vicky and Maureen spoke about the joy and excitement of bringing Irish felt to Finland, and our gratitude to DCCI for part funding the undertaking.

Before returning home, there wasn’t a dull moment. We began with an interview with yet another journalist. There was great interest in the back stories to many of the Irish entries, which concerned topics such as pollution, mental and physical health care, and the Northern conflict. It seems the colour red raised a lot of strong emotions in the Irish.

We then went on a round trip of several farms, visiting local herds and producers. There was absolutely wonderful quality of fibre available, and we purchased a good bit to satisfy our members’ curiosity. We were taken to several felt factories as well. It was great to see the efficient output from relatively small cottage industries. With felt being such an intrinsic part of Finnish culture, its production was evident everywhere. Sirpa arranged for us to meet a moose and learn a bit about the raising of moose and reindeer. Their pelts were in shops all over the country, and reindeer meat is part of the cuisine. By the time we got back to our apartment, after several sightseeing detours and a stop for dinner, we were more than ready for bed.

The exhibition will continue in Jamsa, Finland, until the 4th of August. 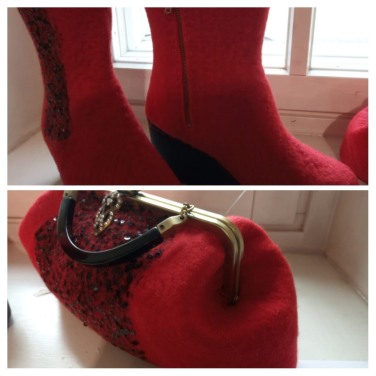 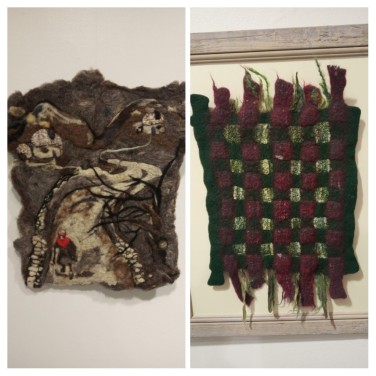 The Irish work will then return here to be on display in Portumna Castle as part of the Shorelines Festival from Sept 8-22. We are so proud of our members who have fully supported our guild in this undertaking. And we are very grateful to DCCI for part funding our participation, allowing us to develop a strong cultural partnership with Filtti. I’m sure we will be working together in the future. 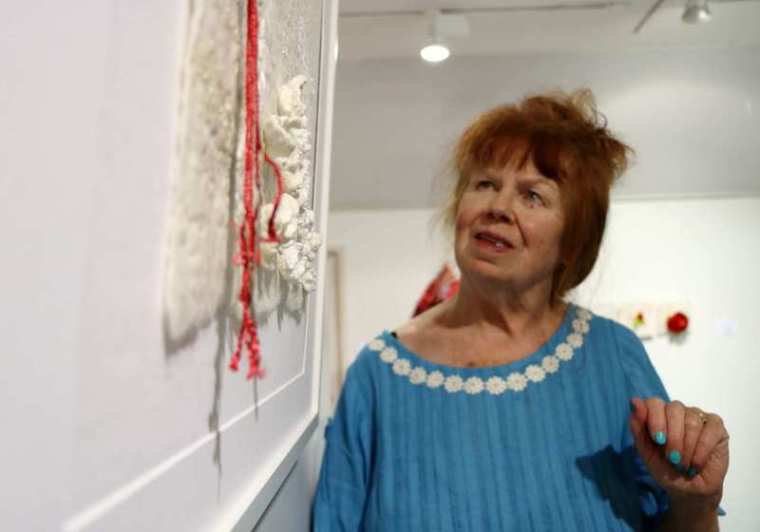